Genesis 16:1-4 “Go, sleep with my slave; perhaps I can build a family through her.” He slept with Hagar, and she conceived. 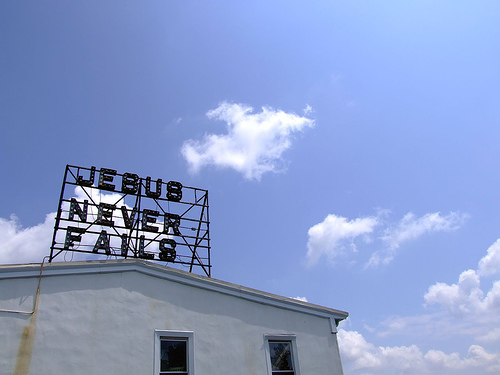 Now Sarai, Abram’s wife, had borne him no children. But she had an Egyptian slave named Hagar; so she said to Abram, “The LORD has kept me from having children. Go, sleep with my slave; perhaps I can build a family through her.”

Abram agreed to what Sarai said. So after Abram had been living in Canaan ten years, Sarai his wife took her Egyptian slave Hagar and gave her to her husband to be his wife. He slept with Hagar, and she conceived.

Human beings will let you down every time.

It doesn’t matter who you choose to look to: Brett Favre, or Miley Cyrus, or your husband, or your wife, or your father, or your boss, or your pastor, or your best friend — you’re in for a disappointment.

Last post we looked at Abram’s amazing encounter with God and we spent quite a bit of time exploring the excellent things Abram did with his life that resulted in his receiving God’s best. Abram went where God was, he sacrificed things of value, he waited on the Lord, and he drove away the birds of prey. (see To your descendants I give this land)

Abram’s 86 and Sarai’s 76. As is nearly always the case, there’s a gap of time between when God gave His promise and the fulfillment of that promise. Thirteen years in this case. Sarai was tired of waiting on the Lord for the promised fruit from her womb. For a barren woman to give a maidservant to her husband in order to have children on her behalf was a common custom in Abram’s time. So Sarai says to Abram, “Go, sleep with my slave; perhaps I can build a family through her.” (v. 2)

Yes it was accepted in society at that time.

Yes it was Abram’s own wife, Sarai, who was admonishing Abram to do this.

Yes it seemed as though this was the only way Abram and Sarai would see any fruit, any family, any children, any descendants.

But in spite of these seemingly compelling circumstances, Abram ought not to have done it. He had a choice and he chose to agree with Sarai. (v. 2) Abram was the leader of his family and part of being the leader is doing what’s best in God’s sight, even when society offers an easy way out. Even when others are telling you to do otherwise. Even if it’s your wife who is doing the telling.

Parenthetically, on the topic of sex outside of marriage, I know of men today who feel that they have valid reasons for engaging in extramarital sex. “Yea but I’m not getting my needs met at home.” or “Yea but this way I don’t have to bother her.” or even one guy I knew who said, “Yea but my wife and I have an arrangement.”

Doesn’t matter. God would have you do the right thing according to His word, whatever your circumstances.

Abram provided a great example for us to follow in Genesis chapter 15, but we can’t look to Abram as our complete model of how to live life. We have only to turn the page over to chapter 16 and Abram falls. Like any other person, Abram will let you down every time.

Roger Federer’s one of my favorite athletes. He’s considered by most to be the greatest tennis player who ever lived. In grand slam tournaments, when Roger’s up two sets to zero, his match record is an incredible 178 and 0. That is until last week. Last week he was up two sets to zero, in a grand slam tournament, against a player with a double digit ranking named Jo-Wilfried Tsonga.

Only one Person won’t let you down. That person is Jesus Christ.

Tags: "Go sleep with my slave perhaps I can build a family through her.”, Genesis, Genesis 16:1-4, He slept with Hagar and she conceived, Jesus, Jesus Christ, love

One Comment on “Genesis 16:1-4 “Go, sleep with my slave; perhaps I can build a family through her.” He slept with Hagar, and she conceived.”