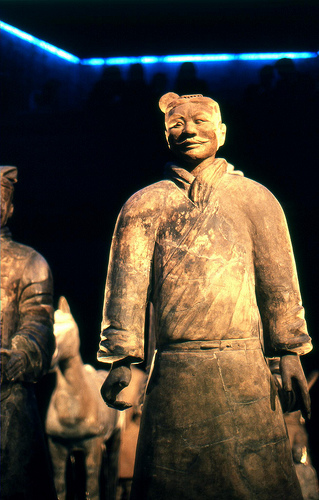 Read the story of raising Lazarus from the dead.

The Love of a General

The Chaplain said, “When I was studying to lead my unit in the war, we were required to read an ancient story about a Chinese general named Wu Chi. One of Wu Chi’s soldiers was suffering from a battle wound that had abscessed. Wu Chi himself cared for the wound even sucking out the infection. The soldier’s mother, hearing this, wailed and lamented. Somebody asked her, ‘Why do you cry? Your son is only a common soldier, and yet the commander-in-chief himself has sucked the poison from his sore.’ The woman responded, ‘Many years ago Lord Wu performed a similar service for my husband, who never left him afterwards, and finally met his death at the hands of the enemy. And now that he has done the same for my son, he too will fall fighting I know not where.” (Sun Tzu, as cited in Traveler and the Chaplain)

Now Jesus loved Martha and her sister and Lazarus. So when he heard that Lazarus was sick, he stayed where he was two more days, and then he said to his disciples, “Let us go back to Judea.” (John 11:5-7)

“Jesus loved Martha and her sister and Lazarus,” the bible says. So how did he express his love for them? Of course you know how the story turns out. Jesus risked his life by going to them, in Judea, the place where the Jews had recently attempted to stone him. And what Jesus did when he arrived there was miraculous, he raised Lazarus from the dead. (You can read the story of Lazarus in its entirety here.)

When the two sisters experienced tragedy (Lazarus was their brother), Jesus said, Let’s go. Then he went and did what he could. Because he was, and is, God’s Son, what Jesus could do was resurrect the life of Lazarus their brother. Even though we can’t bring someone back from the dead, you and I can still respond to tragedy the way Jesus did. Sooner or later God is going to bring you word that someone you love has experienced disappointment or calamity. When it happens, like the general from The Art of War, go and do what you can. Go and do what you can, even if it’s just treating an infected wound, or listening to a friend wounded in a divorce battle, or comforting a friend wounded by the loss of a loved one, or helping someone financially who’s wounded by unemployment.

Then go and do what you can.

That’s what Jesus did.

Category: Bible Commentary, Bible Study, How Jesus Loved People - How You Can Too