Jesus said, “Father glorify your name.” Then a voice came from heaven: “I have glorified it, and I will glorify it again.” The crowd that stood there and heard it said that it had thundered. Others said, “An angel has spoken to him.” Jesus answered, “This voice has come for your sake, not mine.”

Communicating With The Man In The Sky

One time I was on a fire that destroyed eleven END_OF_DOCUMENT_TOKEN_TO_BE_REPLACED

The one thing you can do is at the end of this post. It’s worth it, I promise. If you do it, it will change your life.

Taunts From An Atheist About Praying In Jesus’ Name

I have this friend who’s nearly an atheist. What I mean is, he’s the most atheistic leaning agnostic I know. And around the fire station he sometimes loved to taunt Christians. One time he said to me, (in the snarkiest tone possible), “So the bible says if you ask for anything in Jesus’ name that he’ll give it to you. Right? So ask for a Mercedes Benz tonight. And see if it’s in your driveway when you wake up tomorrow morning.”

In Jesus’ Name: What That Means

Now there’s an obvious answer to that taunt. Asking in Jesus’ name END_OF_DOCUMENT_TOKEN_TO_BE_REPLACED

My family and I were recently discussing what makes people good at math. My son Nathaniel, who’s in his early thirties, brought up something he read in Malcolm Gladwell’s book Outliers. Gladwell talks about a woman in her mid twenties named Renee who’s trying to solve a math problem as part of a research project. Renee is sitting at a computer that allows you to type in x and y axis values to produce a curve. It’s basic rise over run math stuff that we all learned in junior high school or high school (but nearly all of us have since forgotten).

So this woman Renee is sitting at the computer trying to solve a problem. And while she’s doing this, a Cal Berkeley professor and researcher named Alan Schoenfeld is sitting next to her. Schoenfeld knows the problem Renee is trying to solve is impossible. But she wasn’t told that it’s impossible. What she was told, was to enter values that will create a line that is perfectly vertical. But the problem is impossible because a vertical line requires a rise value of infinity and a run value of 0. And infinity divided by 0 doesn’t produce a number.

So she’s sitting there at this computer. And she starts entering in values. And she fiddles around. And she enters some more values. And then she fiddles some more. The whole while she’s talking to herself. And as she fiddles and experiments, her values for y get larger and larger. And the larger they get, the closer the line gets to the y axis. But no matter how large a value she assigns to y it never gets there.

Finally, after twenty-two minutes of trial and error, Renee experiences a eureka moment and she says, END_OF_DOCUMENT_TOKEN_TO_BE_REPLACED 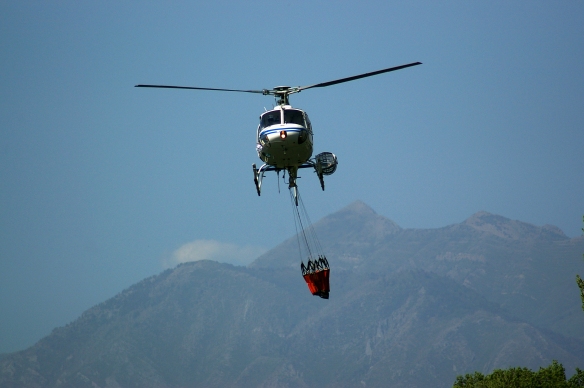 The Fire That Burned 11 Homes

One time I was on a fire that destroyed eleven homes in Ashland, Oregon. One of our tactics on that fire was to use helicopters to drop water on the burning houses. When the helicopters began operating it was important to keep them from dropping water on one particular house where firefighters were working inside. That’s because a helicopter water drop can push fire in all directions, in spectacular fashion, which is very cool to watch. Most of the time when it happens, if the house is well involved, fire just explodes out of every window and door in the place. But because it blows fire all over, a water drop from a helicopter can cause serious injury or even death to anyone fighting fire inside.

So with a couple of crews inside this house and with the helicopters flying all over doing their water drops, I became concerned that they would drop on the house with my guys inside. So I called command on the radio.

“Command from Oak Knoll Division,” I said. “Direct the helicopters NOT to drop on the house directly across from 8106.”

Command responded, “Copy, send a helicopter to drop water directly on the house across from 8106.”

Of course that was exactly what I did not want them to do. END_OF_DOCUMENT_TOKEN_TO_BE_REPLACED